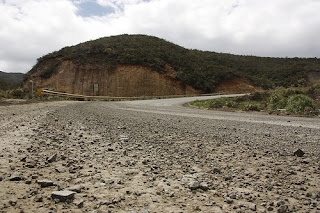 For many of you who drive around in Ecuador you soon come to realize that you are not in Kansas anymore.

Although Ecuador has some good highways in many regions, it still lacks the standard that many of us are used to in North America or Europe.

We tend to forget that Ecuador is still a developing country and the infrastructure is in development stages Ecuadorian style.
This may soon change.  Is a super highway in Ecuador on the horizon?  You bet according to Ecuadorian President Rafael Correa.  He announced back in January that the government will invest 5 billion dollars to construct 5 super highways in Ecuador.

“The work is just beginning Ecuador is a country with 50 years of setback in the construction and repairment of highways.

Correa further told the media that the designs of the super highways in Ecuador are completed and the construction will be finished by 2014.

The new super highways in Ecuador will join the following cities:

Correa mentions that the construction of the super highways in Ecuador will reduce travel time, accidents, and assist in economic growth.
Do you have first hand knowledge of any new construction of these highway improvements?  If so, I would love to hear from you.  Please post your comments.
*source insidecostarica.com