There has been recent announcements regarding the airport in Manta, according to the El Mercurio newspaper.  The online article states that Elroy Alfaro airport in Manta has received money from the government to expand the airports fire fighting potential to a category 9.

For an airport, this is the highest category that the airport can achieve.  This allows the airport to handle any type of emergency that can be expected to occur in an emergency situation. With the addition of pumper trucks  that are capable of 4,500 gallons of water with dry powder capability, the airport is ready and capable.
Should an emergency happen outside of the airports jurisdiction, the city of Manta will benefit, as the units will be available for the city as well. 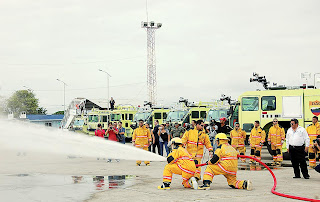 The government has injected cash into the airport previously as well.  The first phase consisted of expanding the runway to 3,600 meters along with other physical works for a total of $5.4 million.
The city is keen on wanting to turn Elroy Alfaro into an international airport. With the recent commitment from the government, this brings hope to many that the airport is one step closer to becoming an international destination of travel.

“What a boost it would bring to the city! It would be great for the tourists!”