Skip to content
You are here
Work week May 13-17th, 2013
If you missed Building a rental home on the coast of Ecuador Week #6, you can see it here.
In week 6 you had seen the workers pour the cement roof on the rental home. On Monday May 13th the crew of 20 men was scaled back to 3 people. Their task this week was to begin finishing off the “rough” concrete roof and make it smoother and to slope it for drainage. The “maestro” (the equivalent of a trades person) and his helpers begin by adding another layer of cement and using a trowel to smooth it out. See the before and after pictures below to get a better idea. 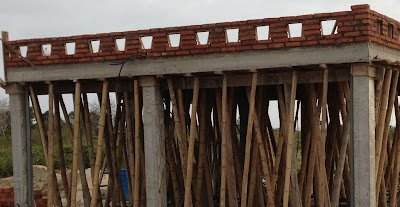 After two days of “mucking” around on the roof the maestro begins to work on the bricks for the architectural design of the roof from May 15th to the 17th. To end the week, the bricks for the trim were all set and put into place for the entire roof line.
The bamboo poles are to be left in place for 30 days after the roof has been poured. This is necessary to allow for the cement roof to cure, and to dry and set properly. It is important that enough bamboo poles are put into place and that they are not taken out to early. Sometimes this can happen due to construction pressure. The result of doing this will lead to cracks and structural problems in the future. It is therefore important that this is monitored. 30 days seems like a long time, but I would rather see the cement do “its thing” rather than have a cracked roof!

My thought for the work done this week

My feeling this week was that the pace was a little too slow for my liking. Three and sometimes four men should have had a little more done than what they achieved. Overall things are A+ thus far!
Next Post..We start on laying the bricks for the walls.