For week #4 of the construction phase, I’m going to show you the continuation of last week. I said, “you wouldn’t believe your eyes” last week when you see what the plumber does. In week #4 the plumber is with us to install some of the preliminary water and sewer pipes. The plastic tubes are just laid on the ground or carved into the cement footing with a hammer and chisel. Crude yes, have I ever seen this before no.. Does it work? In South America yep, apparently it does. No building standards here folks! Or not to the standard we know as North Americans. There are things they need to do but let’s just say the building code is fairly relaxed.

At the end of a few days of work the workers have done a few things. On the left hand side of the picture you can see the 2 quarter sections have been compacted and filled to the level that the cement floor will be poured. And the white tube in the middle of the house is where some of the electrical cable will be fed through. The black tubes you see represents where the electrical wires will be fed through and come out at various areas of the house where the electrical outlets roughly will be. From there they can work with the wire and put it to where it is needed. 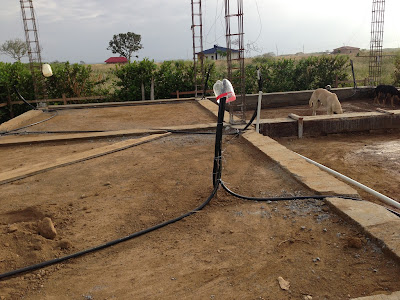 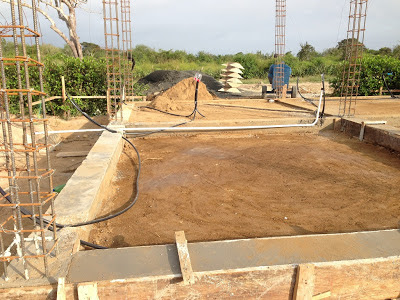 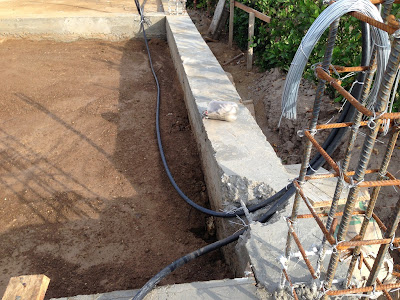 The large gaping hole that was chiselled out of the cement is where the sewer pipe is going to be installed that goes to the bathroom in the corner of the house. 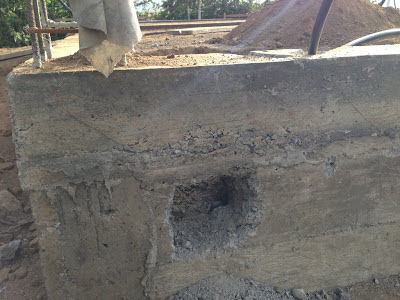 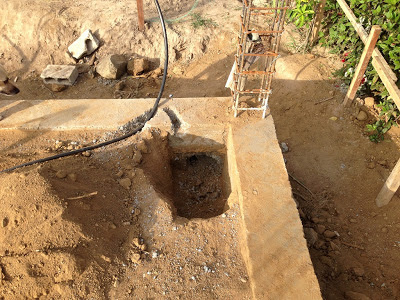 We are at the end of the working week now at April 25, and I saved the last for the best. “Look what the plumber does!” First he make a big “boo boo” and spends a couple of hours chiselling his nice big hole on the left and digs out all the compacted gravel by hand to find that he made the hole in the wrong place. He went to far too the left and now needs to make another crater hole on the right. Hmm…something tells me that either he does not read the Architect plans, or the Architect does not give instructions. Why was this my job to fix? Hmmm…goes to show you that you need to take matters in your own hands be vigilant when building a rental home in Ecuador. It’s all good. My advice..When building abroad expect things to be different. You just need to accept that fact that some things are done differently then you are used to. If you can’t be there to watch and check the build of your home, have someone that you can rely on to send you information pictures and video. 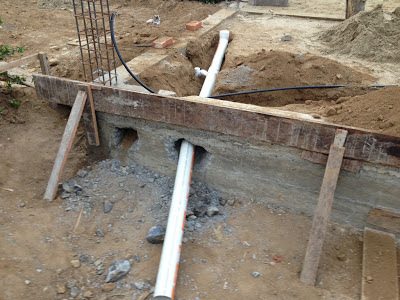 And Wow!! Look how the plumber caps off the sewer pipe. Step one..cut pipe…step two apply heat to end of pipe…step three crimp the heated plastic together…step four…marvel at the trapped gases. No vented sewer pipe to the roof outside here folks…That is the way they do it in South America, and some other countries as well. It took me a while to get used to this strange concept of plumbing, but it is what it is and it seems to work okay. My only gripe is that I really don’t like the way the plumber does this because you still smell trapped sewer gas once in a while. Did someone say I smell “rotten eggs?”

The workers have also finished putting on the metal grid on most of the area of the floor where the concrete floor will be poured the next week. Stay tuned folks!