In case you missed it, here is work week #9

Week #9 on building a rental home on the coast of Ecuador seen the walls starting to come up and the electrician and plumber were around to do some rough utility work. You also read how a special material was rolled onto the concrete roof to form a sealant for waterproofing.
This week the further progress is being made on the roughing in of the electrical and plumbing. The masonry workers were also back to close in the interior for the drainage pipes in each corner of the house. You’ll see below when I explain it in the pictures below. It is a rather strange concept, and I have not ever seen this before, so it is worth some explanation. So here goes with the pictures..
The main brickwork has been completed on all 4 of the exterior walls. The bricklayers also made rapid progress on the bricks in the interior as well, separating the rooms with the brick walls. The same brick is used for the interior as they used for the exterior. Not sure why, but this is what is done. It is a good brick and resistant to the elements, so I am told. Perhaps this is the reason why it is used this way. Sometimes the humidity can be the same inside as it is outside. This can be controlled by using an air conditioner inside the house to help suck out the humidity when living on the coast.
The exterior bricks are finished as shown below. The white square you see on the left of the entrance door below is the service point for the electricity. The cable is buried under the ground now. It is also the entry point for the water pipe from the main line, which is also seen just below the white plastic square. It also is now buried under the ground. The small hole in the top middle of the entrance is where a motion light will be installed much later. 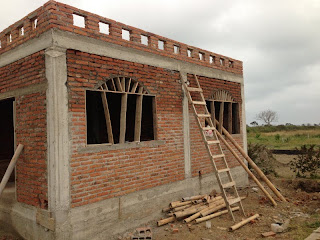 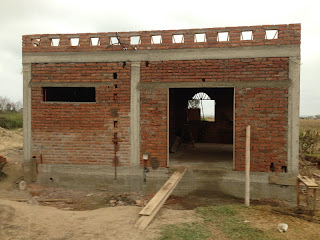 In the next series of pictures, you will see how they have “cut in” to the brick to lay the plastic pvc conduit that the electrical wire is inserted into. The conduit is run to the points where the outlets and lighting will be. Later it is filled with a concrete mix to fill in the holes. 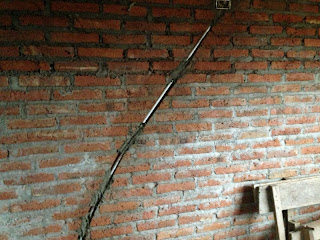 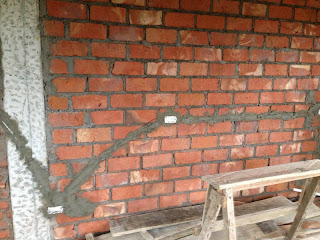 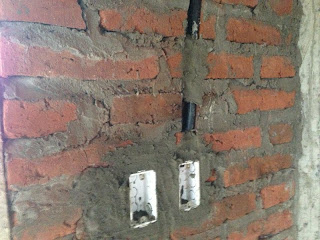 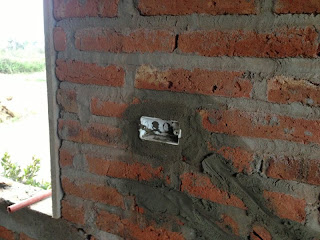 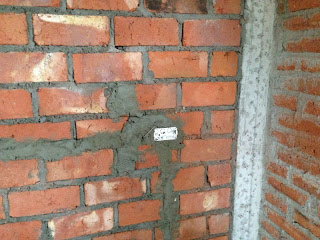 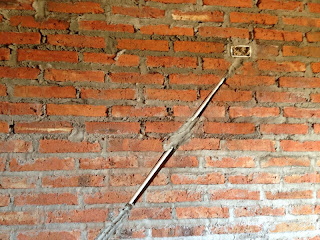 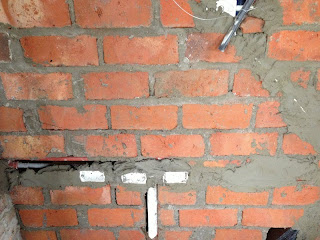 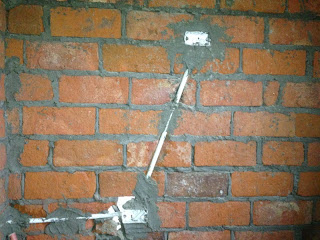 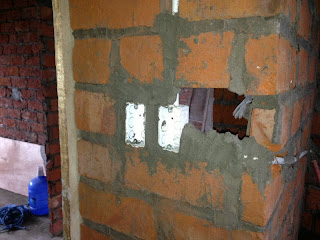 Make a hole in the wall? No problem Good ol’ Portland cement to the rescue! 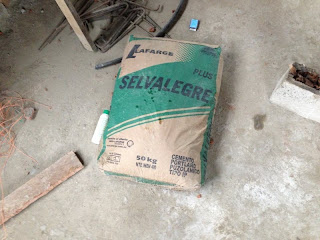 Now here in the pictures below, we have the workers have started troweling on the cement mixture over the bricks on the ceiling. It is rough but fairly smooth. Another product will be applied later that is even more smooth. More on that in a later post. 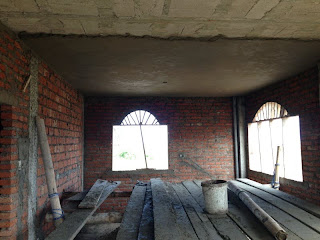 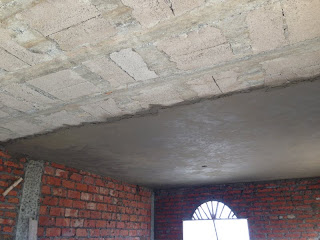 Now here’s the strange one, and I left it for last. Remember I said in another post that there was drainage holes in every corner on the roof of the house? As you seen the roof is divided into 4 quarters. Each quarter has a drainage hole sloped to every corner for rain runoff. Well, here is the strange thing, you would think that you would just use a rain gutter with downspouts down the side of the house right? No, not for Ecuadorian built construction. This concept is unheard of and not used. Instead they place a pvc pipe attached with a 45 that is placed straight down each corner of the house. Later a cast is made around it and cemented in as seen in the pictures below. STRANGE! Don’t understand to this day why it just was not placed on the exterior of the house.
The pipes go straight down and then have another 45 put into it to direct the pipe back outside to the exterior. Then it will be attached with another pipe and diverted underground to your grass or plants. Where ever you want it to be placed to irrigate. There is holes drilled into the pvc for the irrigation area. I questioned this extra expense and labor, and really think it is unnecessary and should be eliminated. Aesthetically it looks nice I will give it that because it is all hidden and it does direct the rain water to where you want it, so I overlooked it and decided to accept this concept and embrace this concept and chose were I wanted the pvc to be dug into the ground where it would best serve my future trees etc..
Look in the corner, circled in yellow. You can see the pvc pipe coming down from the roof into the interior. This is before the cement cast is placed over it. 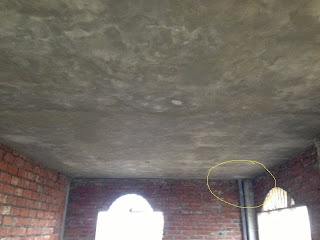 Here is the cast being built over it. Later, it will be encased with cement. 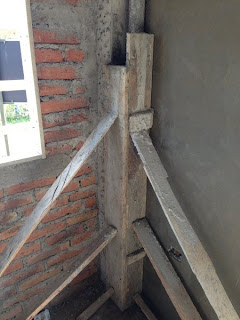 And here it is (pipe on left) coming back out with a 45 on it back out to the exterior of the house. Later attached with another pipe, buried underground and put where I want to have the pipe irrigate with the rain water from the roof. 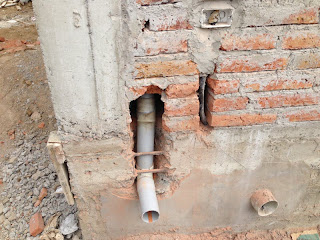 I hope you enjoyed WEEK #10. See you all with another post on Building a rental home on the coast of Ecuador real soon!

For my subscribers to my FREE Newsletter, Keep an EYE on your Email Inbox. I will be revealing the costs of building my rental home real soon. Stay tuned for that, you won’t want to miss that!